Gone to the dogs

Cheshire police have confirmed that, following a successful trial run by their neighbours in North Wales, they will be rolling out extreme new measures to keep the crowd under control at Sunday's conference clash between Chester and Tranmere.

In the early hours of Wednesday morning, police on the A55 deliberately hit a dog with a car so as to prevent the carnage that could be caused if a dog got hit with a car. It has now been confirmed that this was an experimental method that the police plan to roll out to other operational areas.

"It's not a first port of call, but it's there if we need it," explained PC Billy Truncheon, who is looking forward to the overtime that he'll get paid on Sunday for artificially heightening tension at a football match.

"You have to remember that the dog had bitten an officer and caused an HGV to swerve.  It's basically a two strikes and you're out policy.  We think the trial has good parallels with the match at the weekend, except that H block Chester fans are more likely to bite you, and lorry drivers are less likely to swerve for a Tranmere fan."

"Anyway, if someone disrespects a minute's silence, makes a rude gesture to the opposing fans or sings that song about smelling bacon, they're gonna get mowed down by me in my Q5."

"I've been playing Grand Theft Auto to get a bit of practice in."

This plan will continue a rich history of the police treating football fans in Chester like dogs.  If you do want to act like a hooligan within the city, however, there is ample opportunity to do so at Chester Races, where you can act like the most despicable human being alive so long as you wear a skinny tie and shiny suit from Next; and so long as you are accompanied by a woman with a daft hat, a tan the colour of nuclear-grade Orangina and heels that she's too drunk to walk in.

Posted by The Jestrian at 20:31 No comments:

"It was just a slip of the tongue," said the offending party, Q Block regular Finlay Stick. "Obviously I was trying to hark back to the Steven Vaughan days, I just can't believe it's been so long!"

The "look at where we were 'x' years ago" line has been deployed ever since the reformation of Chester FC, but must strictly be used in a positive context.  The gaffe at last night's meeting almost caused people to remember that four years ago, attendances were up, community classes were a regular event at the club, the Community Engagement Officer post wasn't just a creative way to pay the assistant manager a bit more cash and there was a burgeoning media output of highlights and commentary which served as a fantastic marketing tool for the club before it was cynically placed behind a paywall in the interests of short term profit.

"We at The PB operate on the straightforward principle that if a thing is not as bad as another thing then it is not bad at all," explains Positive Blues chairperson Gaston Shimmerbones.

"Therefore, until our club is once again being run into the ground by a man with alleged links to some of Liverpool's most dangerous criminals, I can find no reason to provide even the most constructive of criticism," continued Shimmerbones, who is the sort of guy you get screaming "first world problems" at people when they complain that their flight to Tenerife is delayed by an hour, that the local Waitrose is out of hummus or that their smart phone battery ran out before they could call an ambulance for their mum.

Fortunately the fracas at the Blues Bar died down as all attendees joined together in a rendition of "Always Look on the Bright Side of a Pasting Against Lowly Aldershot", with Steve Burr providing rhythm on his expensive new bongos.

Later, a man in his mid 30s was ejected for suggesting that maybe Chester could mark a bit tighter at set pieces.

"Apparently our marking is fine because at least Terry Smith isn't chairman anymore," he explained on his way out.
Posted by The Jestrian at 10:07 No comments:

The proposed signing of Freddy Hall by Chester FC has fallen through after it was announced that the goalkeeper had made outrageous demands regarding his accommodation, probably.
Reports from The Genius Farm (aka. Devachat) have suggested that the Bermudan shot-stopper, who has thus far represented the Blues for free, asked for a 12-bedroom mansion, called Freddy Hall, to be constructed for his usage on the outskirts of Saughall, in addition to a standard living wage.
"People are upset, because they think we've snotted the playing budget up the wall by signing former international footballers who are mates with the gaffer," said one fan.
"But no-one has taken into account the possibility that Freddy wanted a jacuzzi in his bedroom, funded by the club."
Hall's agent attempted to dispel these rumours, stating that the keeper would have stayed with a fan if the option was available. However, former Blues director Jiff Bricks moved to discredit the source in a Twitter conversation with journalist Jim Beam by euphemistically using the words "interesting character" then stating that "agents can be funny things..." and not finishing the sentence so that you can fill in the blanks as you please.
Other fans have been keen to point out the progress Chester FC has made since its reinception.
"You've gotta remember that, when Vaughan was here, we had players playing without being paid, and a club website which would churn out knee-jerk statements in response to Deva Chat topics, eulogising about how ace the chairman was," reminded C Blocker Hilary Breadbaskets.
"Look at how far we've come since then!"
With Hall out of the picture, Chester have instead signed Wales under 21 keeper Connor Roberts who, it has been reported, will live in a ditch.
"Freddy thought it beneath him to sleep in a grubby hole, but Connor's from Wrexham so he'll be used to it," confirmed manager Steve Burr.
Posted by The Jestrian at 15:54 No comments:

Former Chester FC manager Neil Young has revealed that he's "getting loads done" since his departure from the club midway through last season.
Young left the Blues by mutual consent after making a poor start to the season and after being made to manage whilst Jim Harvey strolled about the place with some non-descript role, which always seemed a bit sinister whatever slant you want to put on it.
"Obviously it was disappointing to leave," said the former Seal King. "But on the bright side, I've finally completed Coolboarders 2 on PS1."
"It took me days, but I eventually landed a 720 Stalefish in the halfpipe, just in time for Mrs Young to demand I take the bins out. She didn't seem to appreciate what I'd just achieved."
Young remains philosophical about the way that it ended with the Blues.
"You can mooch round the house kicking the skirting boards and devouring Chupa Chups, or you can just be happy with the model train set you've now been able to build in the loft," philosophised Young.
"I've made a replica of the Merseyrail set-up. Got some lovely die cast engines and used some green Chupa Chups as trees. Even got the dog to pee on it, so it smells the same as the real thing, too."
Not everyone is convinced that MC Puffer Coat is enjoying his time off however. Journalists Tennis Ball and The Tall Peacock have revealed that they have been receiving increasing numbers of texts and emails from Young.
"Yeah, I even had a voicemail the other day asking why I never want to talk any more," explained the Peacock. "He said I was dead keen when he was manager, but that now it's like I don't even care."
"Then he started doing the trumpet riff from One Less Problem by Ariana Grande feat. Iggy Azalea. Proper odd."
Former assistant Gary Jones has rubbished these claims.
"Nah Youngy's doing fine," bellowed 'Jonesy'. "I was round his the other night for a Scalextrics tournament.
He still puts on a barnstorming evening."
"He does seem to have developed a Chupa Chups addiction though."
Posted by The Jestrian at 15:31 No comments:

Blues manager Steve Burr has confirmed that Chester will likely get relegated next season and that when they do, it'll well be John Danby's fault.
Danby is currently in the second year of a two year contract, which pays him £1m per week, or something like that, probably.  With the popular goalkeeper unable to train during the day under the club's new full time structure, Burr is keen to remove him from the wage bill, and bring in someone less talented but more unemployed.
"Obviously situations like this are going to arise," admitted chairman the Phony Gherkin.
"We're full time now, which was a stupid move, but Steve insisted he wouldn't take a part-time job, because he's 'not a sixth former'."
"Obviously we wanted to keep hold of the Burrmeister, because that helps me achieve my vision of having a bald Celt in charge of Chester FC. So the only thing to do was completely overhaul the way the club is run."
Though some may suggest that the overheads involved in employing Burr full time and changing the club so that it operates on a full time basis may have negatively impacted the playing budget, the Blues boss insists this is not the case.
"Nope, all John Danby's fault," confirmed Not Neil Young.
"The full time thing was necessary for this club, cos I gots to get paid, son," he continued.
"The fact that we can now only attract the worst full time players, rather than the best part time ones... Well that's part of the price you've gotta pay so that I can tell my wife I've got a proper job."
The Danby saga is expected to rumble on into the season, before being superseded by complaints about pies from people who apparently can't be out of the house for two hours without succumbing to the overwhelming urge to eat filth.
Posted by The Jestrian at 11:24 No comments:

The Jestrian
Everything you read on this blog is 100% fiction. The quotes and stories are entirely fictional and intended as parody. If you needed this explanation, then you're probably not the kind of person who's going to appreciate the humour involved. 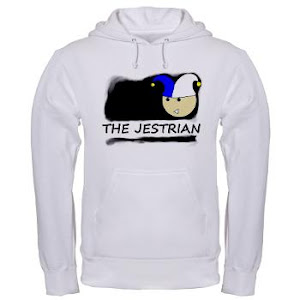 Buy some stuff with a jester on it

Well, you should have come up with the concept yourself then, shouldn't you?